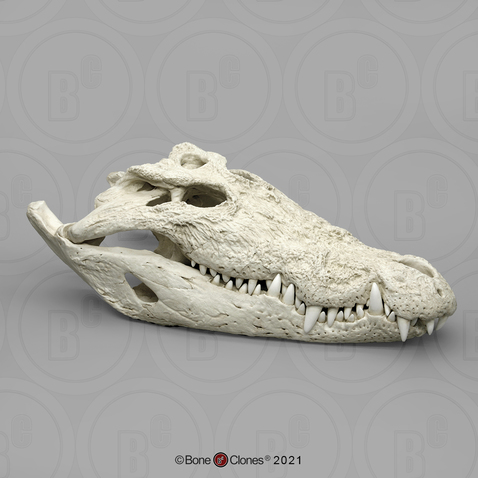 (Stand and base sold separately)

The largest crocodilian species alive today, this saltwater crocodile is estimated to have been 21.5 feet long and 1400 pounds (on the basis of the 33-inch skull length). The saltwater crocodile is found in the coastal waters between Northern Australia and Southern India and in freshwater swamps and rivers in Sri Lanka to the Solomon Islands, including Bangladesh, Vietnam, the Philippines, Indonesia, Papua New Guinea, and the northern coast of Australia. While its name reflects its ability to survive in brackish water, the young are born in freshwater. The female may lay as many as 40 to 90 eggs in a nest made of plant matter, with the sex of the newborn being dependent on the temperature of the nest.

As young crocs get closer to adulthood, they are kicked out of the freshwater venues by dominant adults who use the areas for breeding. They consequently swim around the coastal waters looking for other river systems. 2-part skull (separate cranium & jaw).

A custom metal display stand is available below. Instructions for setting up the skull on the stand are available here.