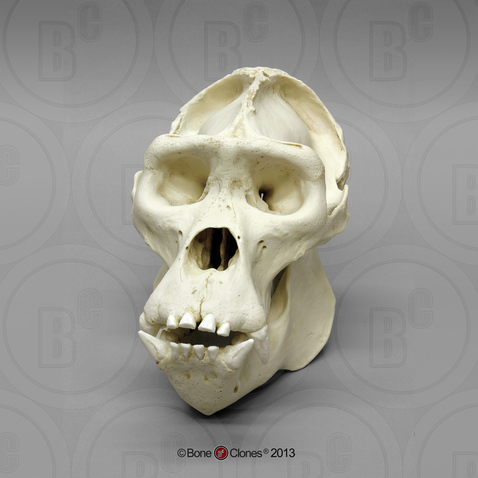 Mountain Gorilla BC-124. Mbongo was born in the high mountains of what was once the Belgium Congo and is now Zaire. He and another young gorilla named Ngagi were captured in 1930 by the famous explorers, Martin and Osa Johnson. The gorillas were brought to the United States, and every zoo that could afford to do so, put in a bid for the pair. San Diego benefactors Ellen Browning Scripps and Robert Scripps quickly supplied the funds, making Mbongo and Ngagi the first gorillas to be exhibited at the San Diego Zoo.

Mbongo was about five years old when he arrived in San Diego in 1931. When he first arrived, Mbongo weighed 122 pounds. In 1942, Mbongo died of a fungal disease called coccidioidomycosis at the age of 16. The autopsy of Mbongo revealed that he was not an adult, even though his size and weight were enormous. The hairs on his back were not silver, indicating he had not reached maturity. His official weight was 618 pounds but at his last weighing, he was too large for the scales which fluctuated between 645 and 670 pounds. His height was 77 inches and his reach from finger tip to finger tip was 97 1/2 inches. We are grateful to the San Diego Museum of Man for granting us exclusive permission to cast this rare skull. 2-part skull (separate cranium & jaw).

A custom metal display stand is available below.