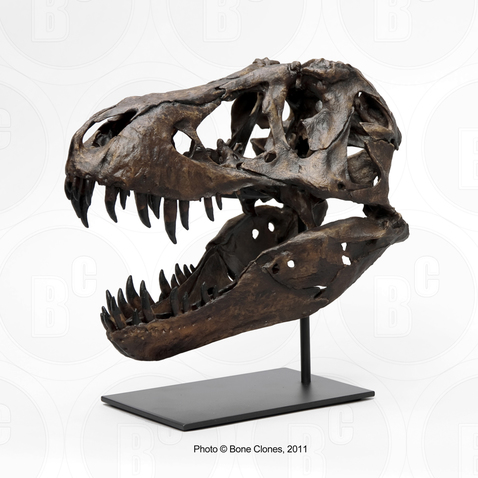 We are grateful to Black Hills Institute of Geological Research (BHIGR) for the opportunity to collaborate on the production of this 1/6 scale version of the Tyrannosaurus rex skull (BHI-3033), commonly known as STAN , the most complete and undistorted T. rex skull ever found. Thirty-nine individual elements (plus the brain case) were CT scanned; the resulting digital data were then transferred to a 3-D rapid prototype machine that created an exact 1/6 scale replica. This skull preserves every detail including bite marks and tiny foramina from the original five foot long skull, which has been reduced to a mere ten and one-half inches in length. The original skeleton of this Late Cretaceous (66 MYA) specimen, discovered by Stan Sacrison in 1992 and excavated by Black Hills, now resides in the permanent collection of BHIGR in Hill City, South Dakota.