Paleoanthropology is the study of the human fossil record and the processes that led to our evolution. Fossilized hominid remains are the most direct physical evidence of our human ancestry, and Bone Clones is proud to present an extensive collection of hominid casts composed of discoveries from anatomically modern humans, archaic humans, early Homo, early hominins, and other hominids.

The majority of the casts in this line have been recreated by our team of anatomical sculptors. Some are reconstructions made by paleoanthropology professionals using fragmentary elements from original discoveries and extrapolating the missing parts from those (i.e. Neanderthal skeleton).

We continue to produce new finds as they occur, leaving time for original papers to be published and enough scientific data to be obtained so we may produce our casts as precisely as possible. Each hominid is carefully researched and produced based on some or all of the following: casts of original fossils, the latest literature (descriptions and/or published measurements), input from the scientific community, and full color, life-size photographs, or any combination thereof.

The hominids offered in this series are high quality recreations and are not intended for advanced graduate work or to be used for research purposes. Special thanks to our paleoanthropological and physical anthropology consultants. 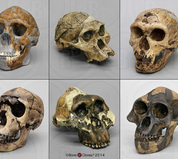 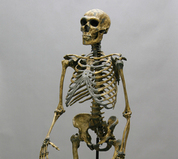 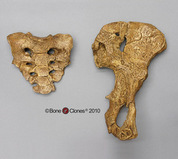