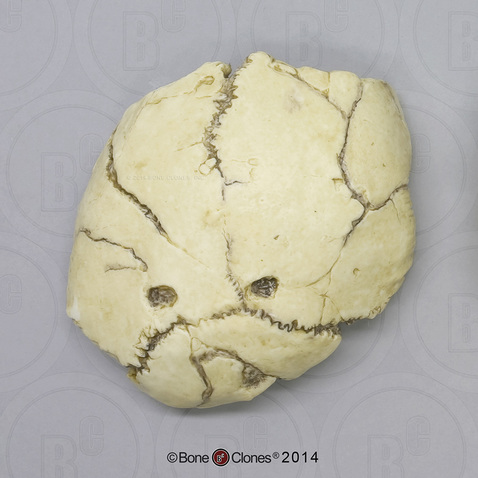 First thought to lend evidence to Robert Dart's "killer Ape theory" (the theory of war and interpersonal aggression being the driving force behind human evolution), the depressed fractures were thought to be the result of an attack by pointed weapon. Years later, after subsequent excavations headed by C.K. Brain, a new, now generally accepted, theory was introduced: the punctures were produced by a leopard attack.

C.K. Brain used another Swartkrans' find, a lower mandible from an African leopard, to hypothesize that the young victim's wounds were from a predator/prey scenario rather than warring primates. To demonstrate this, he matched the lower canines of an African leopard with the puncture wounds of the robustus. Both the canines and the puncture wounds were at equal distanced of 33mm (Brain 1981).

Reports of an analysis of an endocast that was later conducted in 2004 by Ralph Holloway and others states, "This endocast also clearly shows the two 'leopard' puncture holes made by the lower canines, supposedly as this hominid was dragged to the beast's feeding place, presumably a tree" (Holloway et.al 2004).

For comparison purposes our consultants were able to recreate the lower canines aligning with the fractures by using our Snow Leopard Skull, Male BC-056. While not an African leopard, this is a powerful demonstration for students.

Brain, C.K. The Hunters or the Hunted? An Introduction of African Cave Taphonomy. Chicago: The University of Chicago Press. 1981.