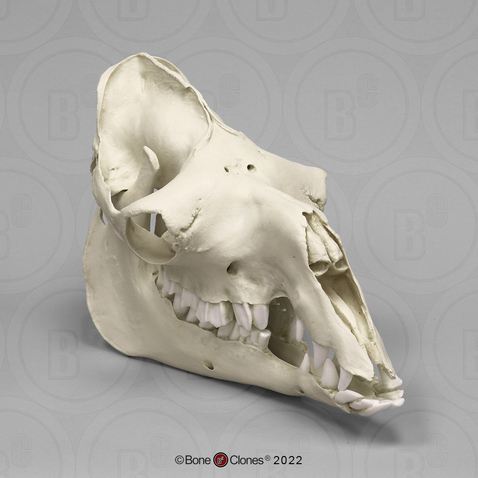 Special handling fees for international shipments may be applied to this order. We will contact you with the amount prior to shipping.

The Dromedary camel (also known as the Arabian Camel) lives in the arid regions of the Middle East and in the Saharan Desert of Africa.

Dromedary camels are distinguished by their sandy brown color, double row of long eyelashes, long neck, padded feet and a single hump. This hump is composed of fat that acts as food storage and will become smaller and lean to one side during periods of starvation. By 6 months of age, camels will have 22 milk teeth and by 5 years of age they will have 34 permanent teeth. Being even-toed ungulates with padded feet, they easily move in desert environments.

The Dromedary cranium (skull without the jaw) can be distinguished from the Bactrian camel in a few ways – the cranium is smaller and longer, a steep nose with a wide nasal opening, concaved forehead, the zygomatic arch is thinner, and a well-developed sagittal crest.

Domestication of the Dromedary camel occurred about 4,000 years ago in Abu Dhabi and the northern portion of the Arabian Peninsula and are still used for transport across arid environments.