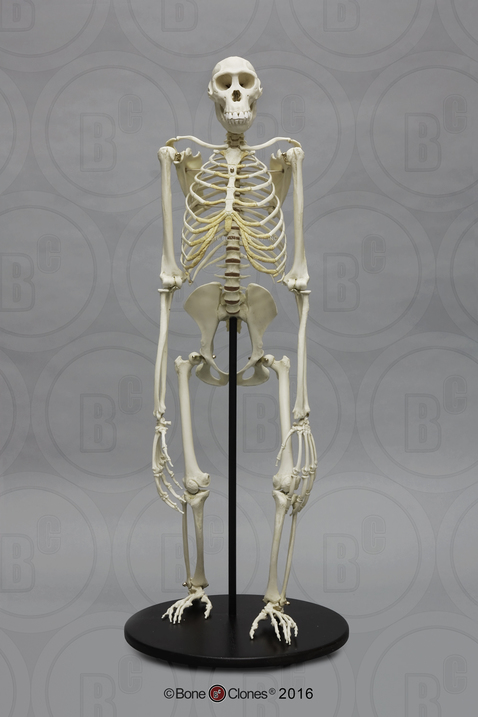 Female, 9-year-old bonobo. Sometimes called the pygmy chimp, the bonobo is a species distinct from the common chimp, P. troglodytes. Its behavior, especially among females, is thought to resemble human behavior more than does the common chimp's. Living in the Democratic Republic of the Congo (formerly Zaire), the bonobo is smaller, has more webbing between its toes and less sexual dimorphism than the common chimp. The difference between the two chimps was first recognized by Portielje in 1916 and a few years later by Yerkes. But it wasn't until 1929 that Schwarz described the bonobo as a separate subspecies. Coolidge, in 1933, described the bonobo more fully, finally recognizing it as a distinct species. Humans, chimps, and bonobos share a common ancestry, with humans splitting off around 6 million years ago. Bonobos and chimps parted company around 3 million years ago.

We are grateful to the San Diego Natural History Museum for providing us with exclusive permission to cast this excellent 9-year-old female, who was born in captivity and had at least one offspring. A percentage of the sales goes to the museum to further its research. ©SDNHM2001