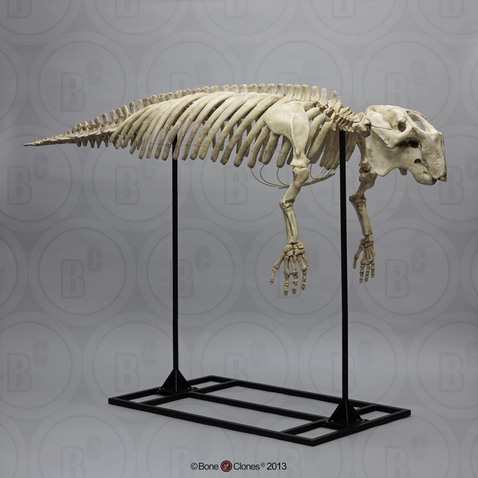 (Stand included, base not included)

7-9.5 mya. This extinct sirenian was found in the Lower Bone Valley formation of the phosphate mines of Polk County, Florida, in 1978 by Melvin McClain. Its modern relatives are the manatees and modern dugong (Dugong dugon). The most notable characteristic of the dugong skull (see BC-321 Fossil Dugong Skull) is its deflected (down-turned) rostrum, an evolutionary adaptation to its role as a seagrass eater. Some think that M. floridanum is descended from Old World dugong (M. medium), which would suggest movement of the species from Europe to North America. A competing hypothesis places its origins in older N. American species, a hypothesis that implies parallel evolution of the rostra. In different parts of the world, several species of sirenians existed side by side and apparently adapted differently (longer tusks, etc.) It's not known exactly why so few sirenian species exist today. With gratitude to George Heslep (who oversaw the minimal reconstruction of the skeleton) for providing us with this magnificent specimen.