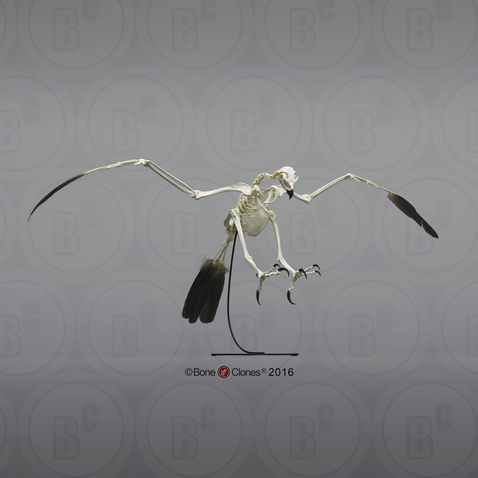 The golden eagle (Aquila chrysaetos) is the largest bird of prey in North America. This impressive raptor has a wingspan of over 7 feet with dark brown plumage and golden feathers on its nape, with legs feathered to toes. The most widely distributed eagle, it is found in a variety of habitats including tundra, grasslands, coniferous forests, deserts and along waterways. Often hunting in pairs, each bird can carry 8 pounds in flight with their diet consisting of rodents, rabbits, reptiles, carrion (dead animals) and other birds. Monogamous, they build huge platform nests on cliffs.

The golden eagle is federally protected under the Bald and Golden Eagle Act and by the Migratory Bird Treaty Act. Special thanks to the Vertebrate Zoology Department of the Santa Barbara Museum of Natural History for the opportunity to cast this skeleton. This cast would be a great addition to any biology, zoology or ornithology program studying comparative bird skeletal anatomy.