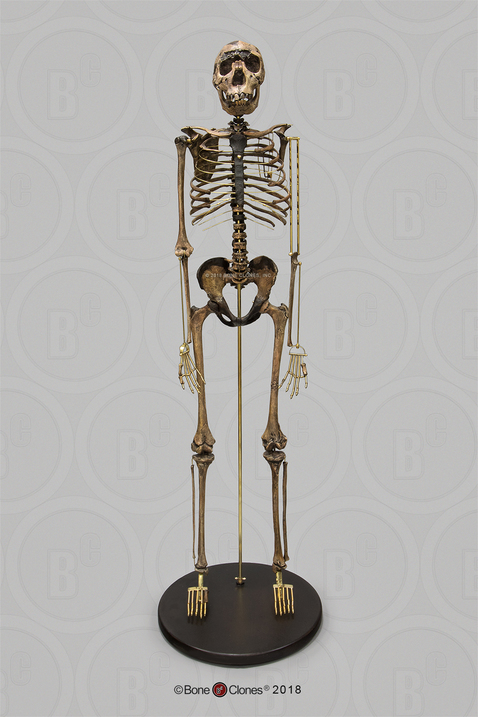 1.6 MYA. The Homo ergaster skeleton KNM-WT 15000 "Nariokotome Boy" or "Turkana Boy" was discovered in 1984 in Nariokotome, Kenya. The first fragment was found by K. Kimeu and the rest of the find was excavated by R. Leakey, Walker and their team. The discovery of the skeleton, of which 40% was found, gave anthropologists a great deal of information regarding body size, limb proportions, brain size, and growth rates of Homo ergaster. The shape of the pelvis indicates the individual was male. Based on human growth models, age can be determined by examining tooth eruption and areas of fusion within the skeleton; his third molars had not erupted and lack of complete fusion in the humerus and pelvis indicate an age of approximately 11 to 12 years old. While his spine showed some signs of disease, he stood about 5' 3" and had a cranial capacity of 880cm³.

Bone Clones reconstructed the Nariokotome boy skeleton by using bones from the disarticulated version, which were based on the original find. In addition, by extrapolating from published data, relationships to other bones, and partial bone fragments, we reconstructed several vertebrae and the sternum, painting these bones black to differentiate them from the found bones. We used brass parts to indicate other missing bones. Custom articulation is available.