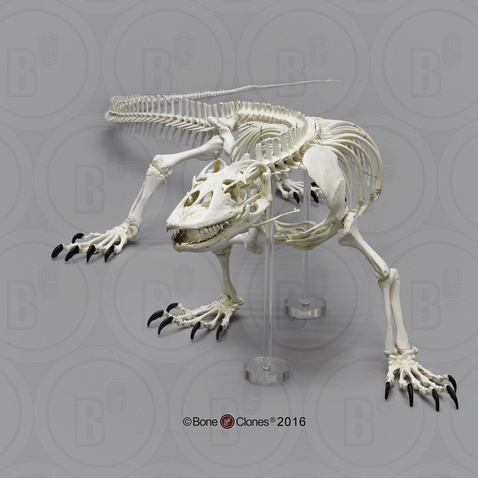 Komodo dragons, endemic to a few small islands in Indonesia, are the largest of the world's lizards (this specimen is approximately 10 feet long). Several attributes place them at the top of their food chain: their size, bacteria-tainted saliva, and keen sense of smell. If their prey manages to escape the dragon's initial attack, a deadly infection sets in with the prey ultimately falling victim to either the Komodo that bit them or another Komodo, who can smell carrion from miles away. They are also known to hunt and feed in groups. Their skulls are very similar to the extinct aquatic reptiles known as Mosasaurs. The genus Varanus first appeared 40 MYA in Asia.

Licensed to Bone Clones® by the ©Natural History Museum of Los Angeles County, a portion of the sales goes to further their work. Custom mounting available for all skeletons. Please Inquire. For additional stability, plastic supports are provided with the purchase of the articulated skeleton.