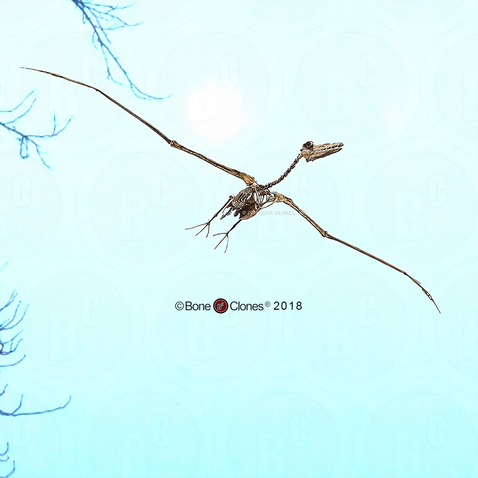 The bones of this fossil giant bony-toothed bird were discovered in Oued Zem in northwestern Morocco and date from the Late Paleocene period (about 50 MYA). The skeleton was painstakingly reconstructed across a span of five years from bones found in the local phosphate beds. Pelagornithids, pseudo-toothed birds, were first recognized as such by Richard Owen in 1873. Bones from these marine gliders have been found in northern Africa, Eurasia, the Americas, and elsewhere. The type specimen, Odontopyteryx toliapica, was found on the Isle of Sheppey in England and dates to the early Eocene period. Our specimen has a bony wingspan of over 12 feet with a projected span of over 18 feet with feathers. We've attached discreet eye hooks to the Bone Clones® cast to allow suspension from the ceiling or a stand. The articulated skeleton weighs about 8 pounds.

The included stand and base is powder-coated metal, custom-made for this product. The stand's footprint measures 3 feet by 4 feet. The height of the stand is adjustable from 6' 5" to 8' 4".