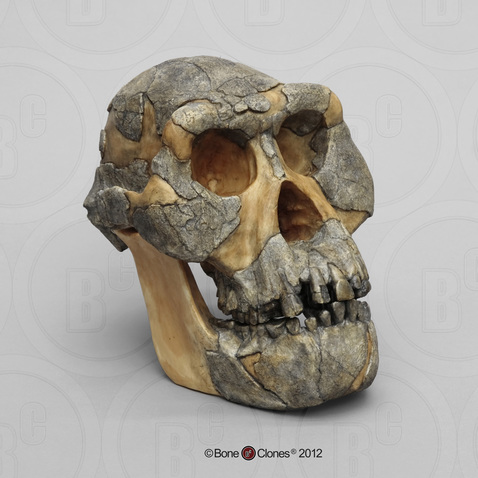 3 MYA. A.L. 444-2 was discovered in 1992 by Yoel Rak in Hadar, Ethiopia, and analyzed with collaborators B. Kimbel and D. Johanson. A.L. 444-2, in addition to being the largest Australopithecus afarensis skull found to date, was the first discovery of an associated cranium and mandible for this taxon. Its size and morphological aspects indicate that it is clearly a male, and heavy dental wear suggests advanced age. Holloway and Yuan (2004) estimate its cranial capacity at 550 +/- 10ml. Before the discovery of A.L. 444-2, the A. afarensis species was known only from fragments of various skulls and a subsequent composite reconstruction, the accuracy of which had been questioned. This long awaited find (nearly 18 years after Lucy's discovery) confirmed the essential features of the composite and played a significant role in addressing other key questions about this taxon. In addition to underscoring the extensive sexual dimorphism present in A. afarensis, Kimbel et al. (1994, 2004) argue that the evident variability supports their argument for the taxonomic unity of the species. Further, they posit that in conjunction with the other finds from Hadar and Belohdelie, these fossils are evidence of a 900,000-year period of evolutionary stasis for A. afarensis.