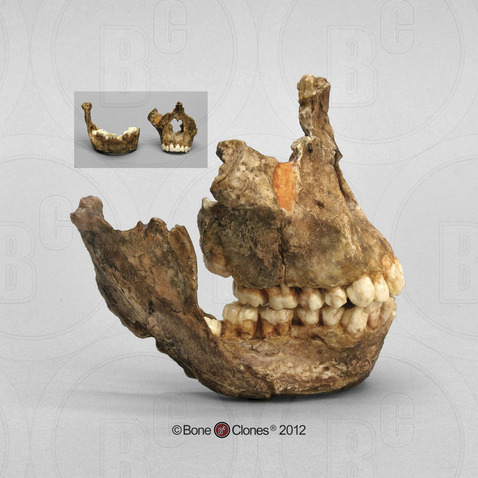 2.3-2.8 MYA. Discovered by J.T. Robinson, in Sterkfontein, South Africa in 1949. The association of Sts 52a and Sts 52b seems reasonable based on the wear patterns and occlusion of the dentition. Sts 52a, which appears to be compressed laterally, represents part of the lower face. It possesses long, thin nasal bones, a relatively sharp lateral margin of the nasal aperture, a moderately long palate, which also may have been moderately wide (before compression), and an intraorbital region that was likely not very broad. Most of the teeth in the maxilla, while slightly cracked, are relatively unworn. M3 is not completely erupted. The small mandible, 52b, is distorted, particularly on the right side. The molars of the mandible show the criss-crossed pattern common to the Taung specimen.