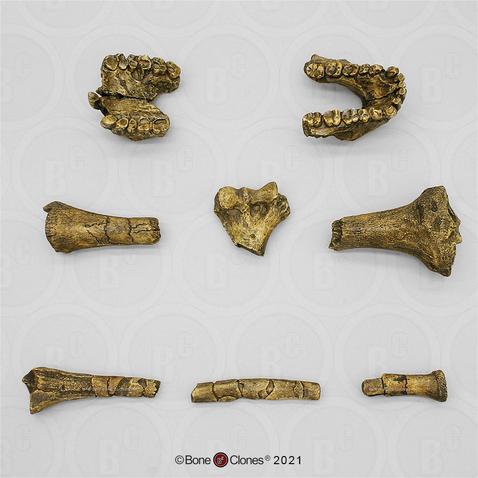 3.9-4.2 MYA. Discovered in Kanapoi and Allia Bay, Kenya. The humerus was discovered by Bryan Patterson in 1965. The other fossils were discovered by M. Leakey's team, including Peter Nzube and Kamoya Kimeu, from 1994 to 1997. A complete morphology by Ward, Leakey and Walker was published in 2001 in the Journal of Human Evolution41(4), pp. 255-368. It is generally accepted that A. anamensis is older and more primitive than all other Australopithecines, including the well known "Lucy," A. afarensis. The tibia presents characteristics that suggest bipedalism.

Of the many postcranial, cranial and teeth fragments found, we have chosen to sculpt, mold and cast the 8 pieces that we felt would be of most interest to the anthropological community. Available as a complete set or individually.