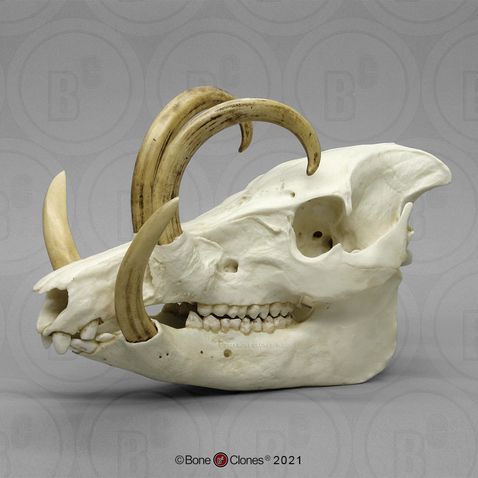 A member of the pig family, the babirusa is found in the rainforests on some of the Indonesian islands. Its most striking feature is its two sets of tusks. The lower set looks normal enough, protruding from the lower jaw and aiming upwards, good for offensive attack. The upper set of canines, however, look more like antlers, erupting from the upper jaw and circling back to its skull, sometimes penetrating it. One explanation for this odd growth pattern, from which the animal gets its name (literal translation 'pig-deer'), is that this set is used defensively to protect the boar's eyes from the attacks of others. Another explanation is that they are simply for display purposes, indicating status. Babirusas can grow to between 2 and 2 1/2 feet tall, 3 1/2 long, and weigh over 200 pounds, while standing on legs that are longer and thinner than the common pig. Tusks are also available separately, see KO-286-4. 2-part skull (separate cranium & jaw).