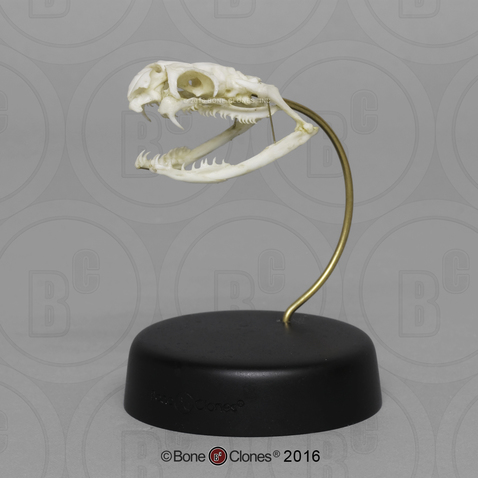 Black mambas are native to the savannas and rocky hills of southern and eastern Africa. One of the deadliest snakes in the world, the black mamba is aggressive, fast and strikes with precision. It is olive-gray in color, can reach up to 14ft in length and is named for its black-blue color on the inside of the mouth, which it displays when threatened. Snakes can feel vibrations in the ground through a single ear bone, the columella auris. This bone transfers vibrations from the ground through the jaw into the brain, allowing them to “hear” vibrations and gain a sense of their surroundings. See close-up photo to the left. The black mamba’s venom is composed of up to three types of toxins: dendrotoxins, cardiotoxins and fasciculin. Dendrotoxins affect the nervous system by blocking neuron channels, leading to difficulty breathing and paralysis of vital organs. Cardiotoxins affect the cardiovascular system by causing erratic heartbeats and inhibits blood flow through veins. Fasciculin is a toxin that affects the muscles, causing convulsions and limb paralysis. Without proper immediate care, the fatality rate of a black mamba bite can be 100%. While these are deadly animals, scientists have discovered the mamba produces powerful pain killing proteins that are as effective as morphine without most of the side effects of morphine. 1-part skull (jaw glued to cranium).