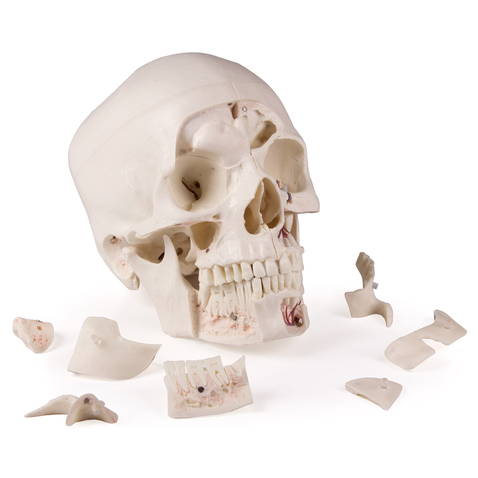 This skull model is an actual cast of a real human specimen and shows all anatomical structures in great detail. It is made for students in anatomy, medicine, surgery, otolaryngology, ophthalmology and dentistry. The skull is intricately sectioned and reassembled with metal and magnet connections.

The calvarium is sectioned horizontally leaving the temporal bone and its sutures intact. Bony impressions of the superior sagittal sinus, transverse sinus and sigmoid sinus as well as the meningeal vessels have been painted. The base portion of the skull has been sagittally sectioned in the way that it passes through the one cribriform plate on one side and another section in the same plane passes through the other cribriform plate of the ethmoid leaving the crista galli perpendicular plate of the ethmoid intact, in addition to the whole nasal septum. The structures of anterior, middle and posterior cranial fossae are easily accessible. One can directly visualize the nasal cavity, the concha, the nasal septum, the bony pharyngeal and naso-pharyngeal spaces. The nasal septum can be separated from the surrounding bones. The frontal sinuses have been dissected on one side to show the sinus as a whole and on the other side chiseled out for full access to the sinus. The relation of this sinus to the nasal cavity is clearly shown and is especially valuable for otolaryngologists.

On one side of the skull the temporal bone has been left in situ. The other temporal bone is removable from the skull. A portion of the mastoid and squama can be removed along with the tympanic antrum, baring the internal ear in full view. All three semicircular canals are visible along with the course of the facial nerve coursing backwards and downward emerging finally through the stylo-mastoid foramen. The removable temporal bone has the external auditory meatus intact.

A vertical section through the squama mastoid process is carried inwards along the petro-squamosal junction and when apart, one sees the position of the tympanic membrane. The carotid canal has been opened as well as the cochlea, showing the internal canal, and the course of the facial nerve has been depicted. Oval window, the semi-circular canals, and aditus of the tympanic antrum are visible.

The maxilla and mandible expose the structures of the dentition - the roots, the bony margin of the alveolar process, dental vessels and nerves are visible. The maxillary sinus can be opened by removing a bone flap. Teeth of the right mandible are sectioned to show the inner tooth structure. Made of polyurethane resin.