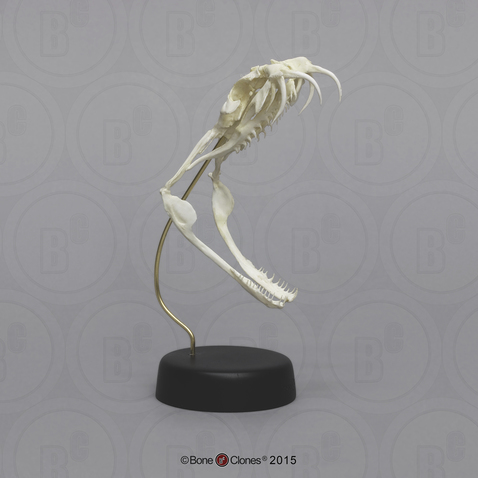 Native to the western equatorial Africa, the gaboon viper is the largest and heaviest member of viperine snakes, reaching lengths of almost 6 feet and weighing almost 30 pounds. Their heads are very large, spanning over 7 inches at the widest point. Their hinged fangs are the largest and longest of any snake species, reaching lengths of over 2 inches. These sedentary serpents are ambush predators. Their beautiful geometrically patterned skin provides them excellent camouflage on the leaf strewn jungle floor.

Gaboon vipers prey on a wide variety of species, primarily small animals and birds.  Their proteolytic venom is ranked 16th in toxicity of the world's venomous snakes. Normally sluggish, they can strike with lightning fast speed and may often retain their hold on their victim until the toxic venom does its job. This large female specimen is from a subspecies population, B. gabonica rhinoceros, which has a distinctive pair of enlarged rostral scales that look like two horns perched on its nose. Its purpose is unknown but it gives them an even more fearsome countenance! 1-part skull (jaw glued to cranium).

Stand and base included.