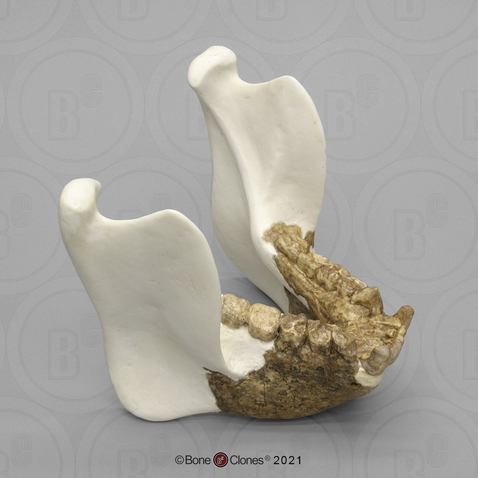 Whether Gigantopithecus blacki, known today as the mysterious Bigfoot, continues to exist hidden in forests today remains a mystery; however, there is no question that a giant primate existed in southern China half a million to a million years ago. Gigantopithecus is estimated to have been about ten feet tall and weighed about 1,200 pounds. Too large to be arboreal, Gigantopithecus was a ground-dwelling ape that most likely walked on its knuckles or fists.

The teeth of the Gigantopithecus indicate a plant-based diet, almost certainly consisting of bamboo. The cause of the animal's extinction is unclear, though speculations on the subject cite a depletion of food source as most probable. Bamboo tends to cycle through sudden die-offs, and Gigantopithecus would have been competing for this limited food source with giant pandas and the newly evolved Homo erectus. American physical anthropologist Dr. Grover Krantz reconstructed a skull based on a fossilized jawbone and teeth, assuming bipedal posture and an ape-sized brain. Dr. Krantz, who passed away in 2002, firmly believed in the modern existence of Gigantopithecus, and devoted much of his life to research and study of the giant beast. Licensed exclusively to Bone Clones® by the estate of Grover Krantz.