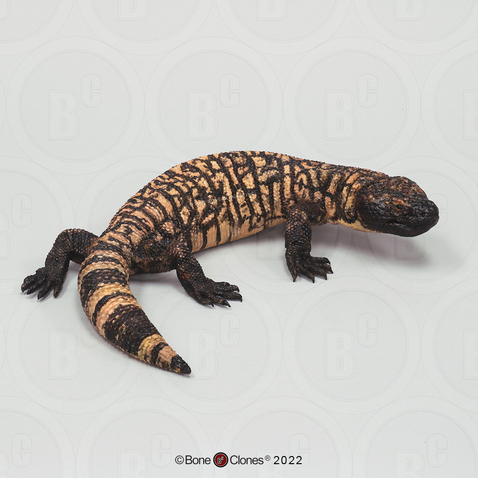 The Gila monster (Heloderma suspectum) and the Beaded lizard (Heloderma horridum) are the only two lizard species in the world that are venomous. The Gila monster is a large lizard native to the southwestern portion of the North American continent. It can be found in terrestrial arid areas, deserts and dry forests in Arizona, New Mexico, Nevada, Southern California, and Northern Mexico. Reaching around 19 inches (48 cm) in total body length, this lizard has a stout tail and is covered with thick scales that resemble beads with an irregular pattern of yellow, orange and brown bands or spots. Please note that color patterns will vary somewhat from cast to cast as it does in real life. Gila monsters do not strike like a snake. Instead it holds on with a vise-like grip and “chews” in the venom, which is secreted from glands in the lower jaw and distributed by grooved teeth unlike snakes which inject with fangs like hypodermic needles. Gila monsters have neurotoxic venom, which affect the nerves. This life cast would be a great addition to any biology program focused on venomous animals.