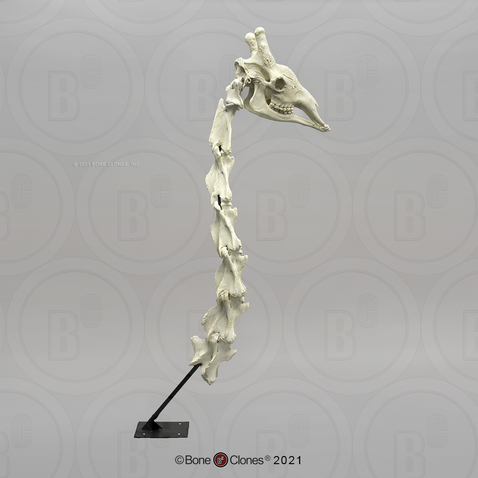 Recognized the world over by their long necks, long legs and distinctive coloration, giraffes can stand over 18 feet tall and weigh over 4200 pounds. A giraffe's long neck contains only seven elongated cervical vertebrae, the same number as in human necks. Giraffe horns, like those of its cousin, the okapi, are not true horns but are formed from ossified cartilage and are termed "ossicones." These ossicones, which are part of the skull, are covered with skin and hair. Giraffe horns, unlike a deer's antlers, never fall off. A female giraffe's skull reaches its full adult growth at about 10 years of age, but a male giraffe's skull and neck continue to grow throughout its lifetime. This large BC specimen reflects that adaptation by the open sutures visible on the skull, which continue to allow for bone growth. Baby giraffes are one of the few animals born with intact horns, which are folded onto their skull to ease their passage during birth.

The skull and neck are available with just the stand as shown. This assembly is not self-standing. Holes have been drilled in the stand's baseplate to allow it to be securely attached to a base of your choosing.

Note: The giraffe skull and neck vertebrae do not come articulated as shown. Assembly instructions are provided.