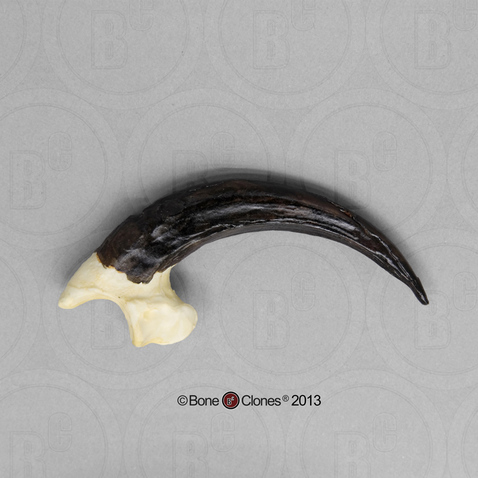 Recent research has uncovered some startling new evidence that the talons of large birds of prey very similar to this harpy eagle's formidable weapon, and the role of early humans as their feckless victims, may have played a more important part in hominid evolution than the ability to construct and use tools for hunting.

Scientists conducting an analysis of fossilized primate and hominid bones discovered that many of the remains, including one of the most famous hominid fossils ever discovered, the 2.5 m.y.o. Taung child, bore traces of predation by the beaks and talons of large birds of prey very similar to harpy eagles. They now speculate that the need to escape from being the supper of these aerial terrorists (in addition to the usual suspects of ground dwelling carnivores) may have led more quickly to increased brain power, as mindfully escaping assault by deadly hunters would surely have taken precedence over the luxury of fashioning tools for hunting small game.