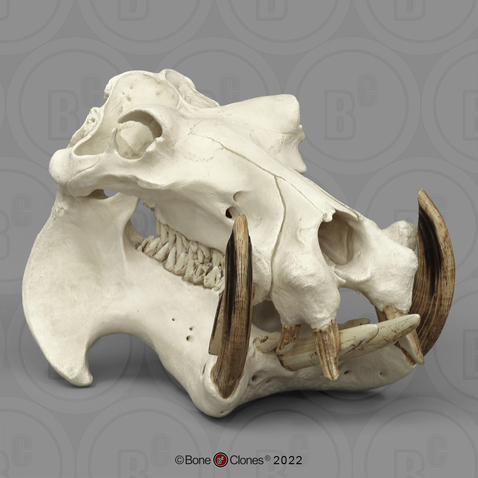 The hippopotamus was once common throughout all of sub-Saharan Africa but is now primarily restricted to the Nile River Valley of East Africa. It averages 11 feet in length, stands 5 feet tall at the shoulder and weighs from 3500 to 7000 pounds. Strongly aquatic, a hippo's eyes, ears and nostrils are placed high on its skull, allowing it to remain submerged to protect its delicate skin from sunburn. Its skin also secretes a reddish-colored substance, which functions as a natural sunscreen. Primarily vegetarian, it eats over one hundred pounds per day. Adult males are highly territorial and use their enormous teeth as effective weapons to battle one another for dominance. Hippo teeth provide a source of ivory that is very hard but considered inferior to elephant ivory due to its smaller size and yellowish color. 2-part skull (separate cranium & jaw).