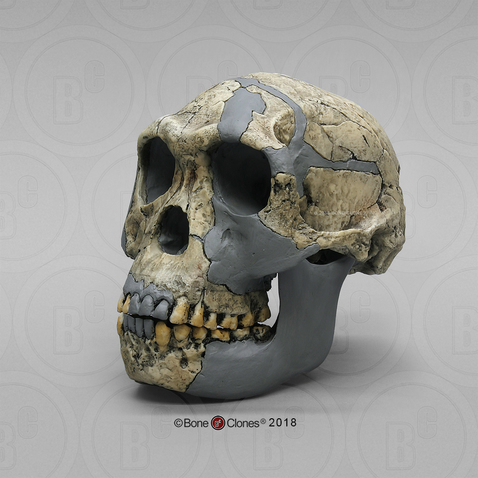 1.9 MYA. The Homo habilis skull KNM-ER 1813 was discovered by K. Kimeu in 1973 at Koobi Fora, Kenya, and described by R. Leakey in Nature in 1973. There is still controversy about this specimen's classification, with some scientists opting to classify it as an australopithecine and others believing it is a species of Homo. Some paleoanthropologists have raised the possibility that KNM-ER 1813 is the female counterpart to the Homo rudolfensis KNM-ER 1470. While dated to the same time period and sharing some characteristics, KNM-ER 1813 has a much smaller face, brain and teeth than 1470. Other paleoanthropologists argue that its brain size of 510 cc (in contrast to 1470's 750 cc) indicates a size difference too great to be due to sexual dimorphism and represents a separate species. Another view is that the differences among the various early Homo crania, including ER 1813 and ER1470, fall within the range of variation of a single species. It's also not the case that this specimen is simply an immature version of H. rudolfensis, as the third molar appears to have been worn down. Instead, it has been suggested that it belongs in a category of Homo habilis, with which it shares similarities in tooth size and shape, cranium size, and face shape.

Exclusively licensed for production to Bone Clones, this composite reconstruction was done by anthropologists G. J. Sawyer and Viktor Deak as part of their research in the production of their book, The Last Human: A Guide to 22 Species of Extinct Humans. Using a reproduction of the cranium of KNM-ER 1813 as a basis for the reconstruction, modifications were made to realign distorted areas of the vault and face. Missing areas to the face, base and vault of the skull were replaced by transplanting selected parts from other individual fossils including OH-13, 24, STS-19, considered to belong to the same genus. Certain areas not available in any fossils were sculpturally restored.