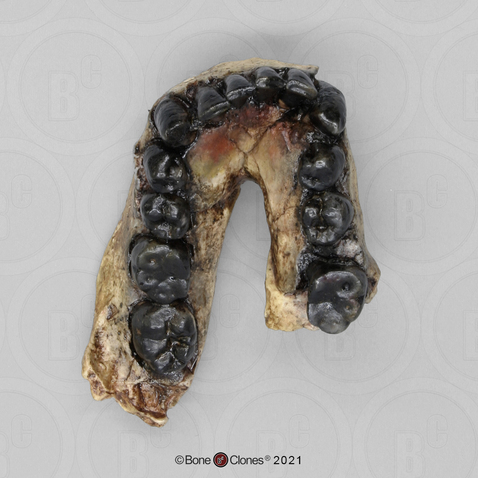 1.7 MYA. The Homo habilis Mandible OH 7 was discovered by J. Leakey in 1960 at Olduvai Gorge, Tanzania, and described by Leakey, Tobias, and Napier in Nature in 1964. OH 7 was the specimen used by Leakey to establish a new species, Homo habilis, marking the beginning of the Homo line. The mandible is one of several bones found in the area, at least some of which are surmised to be from the same individual, likely a 10 to 12-year-old. The inference that the species represented by OH 7 made the Oldowan stone tools found in the Olduvai Gorge area led Raymond Dart to suggest the species name habilis or 'handy man.' Although found in a stratigraphic position in Bed I, Olduvai Gorge, near Australopithecus, Leakey argued for a new species designation on the basis of cranial capacity and tooth size and shape. Cranial capacity estimates for OH 7 have ranged from 642 to 723 cc.The adult cranial capacity of OH 7 is estimated to be 684 cc, significantly greater than that of A. africanus. However, this estimate has been the subject of some controversy because it is based on incomplete cranial bones and a projection of expected adult capacity from a value for a juvenile whose brain growth was not yet complete. The narrowness and length of the molars and premolars, in addition to the relatively large incisors, are unlike the size and shape of the teeth belonging to known australopithecines. Some scientists believe that the range of variation of specimens once attributed to Homo habilis is too great to represent a single species; consequently, more than one species of early Homo may have lived at the same time in East Africa. Another current view is that the differences among the various early Homo crania, including ER 1813 and ER 1470, fall within the range of variation of a single species.