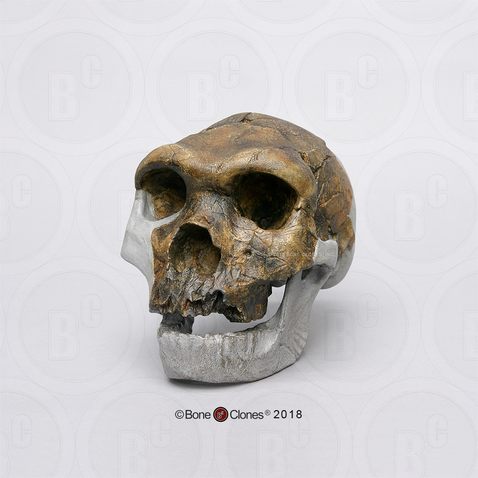 600,000 YA. This skull known as "Bodo" was discovered by Asfaw, Whitehead and Wood in 1976 in Bodo D'ar, in the Middle Awash Valley of Ethiopia. The taxonomic designation of Homo heidelbergensis, particularly with respect to African forms, is a topic of considerable debate. With a mosaic of features, its morphology is considered "intermediate" with greatest resemblance to the younger specimens from Kabwe (Broken Hill) and Petralona. The skull of this presumed male is massive with a broad face (one of the largest among fossil hominins) and a very thick cranial vault. The thick bones, angular torus, midline keel and low cranial vault, are reminiscent of H. erectus while derived features include an increased cranial capacity (1250 cc), the shape of the nasal bones and a browridge that, while thick, is composed of separate and slightly arched supraorbital tori. Interestingly, Bodo has cut marks on the vault, face, and even within the eye orbit, indicating that it was intentionally defleshed.

Rightmire, P.G. 1996. The human cranium from Bodo, Ethiopia: Evidence for speciation in the Middle Pleistocene? Journal of Human Evolution 31,1:21-39.