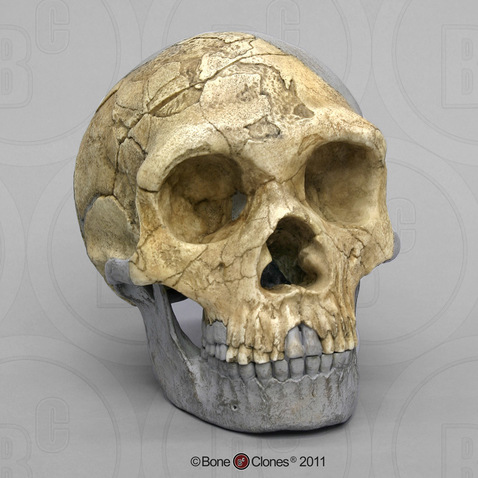 This Homo neanderthalensis was found in 1848 at Forbes' Quarry in Gibraltar. It was the first adult Neanderthal ever found and its significance was not recognized until eight years later, when the famous finds in the Neander Valley caused international sensation. At the time, its exact date was undetermined but recent modern DNA techniques have confirmed that Gibraltar 1 is an adult female and genetically more similar to European and Asian Neanderthals than other Neanderthals found in Spain, with a rough age estimation of 60,000 to 120,000 years old. It exhibits the typical Neanderthal face, with a projecting midface and nose, and prominent browridge. It has been assumed that Gibraltar was the last refuge site of the Neanderthals before their extinction, but this current data suggests that Gibraltar 1 is from an earlier population.

Busk G. 1865. On a very ancient cranium from Gibraltar. Report of the 34th Meeting of the British Association for the Advancement of Science (Bath, 1864):91-92.