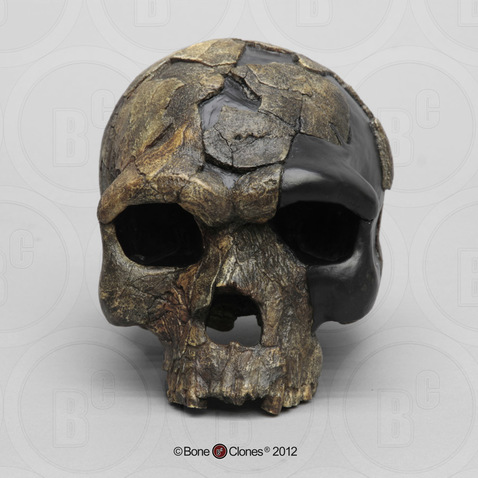 160,000/154,000 YA. BOU-VP-16/1 was discovered in Herto, Middle Awash, Ethiopia, in 1997 by an international team led by researchers from UC Berkeley. This adult cranium with a cranial capacity of 1450cc is nearly complete with only slight distortion. Discoverers White et al. describe the morphology as intermediate between earlier archaic African forms, such as Bodo and Kabwe, and later Anatomically Modern Humans (AMH). It is on this basis that they view it as a probable immediate ancestor of AMHs and designate the subspecies name idaltu ("elder"). Many investigators instead include Herto directly within our own taxon H. sapiens sapiens. For many researchers this find lends strong support to the hypothesis that AMHs emerged in Africa ("Out of Africa") and eventually replaced other populations including the Neanderthals with little interbreeding. Herto was found in association with both Acheulean and Middle Stone Age tools. Interestingly, Clark et al. report that this cranium along with the other two discovered (another adult and a 6-7 year old child) show evidence of postmortem defleshing consistent with deliberate mortuary practice rather than cannibalism.

Bone Clones recreated this cranium based on the latest literature, including descriptions, measurements and photographs. The Bone Clones® Fossil Hominid line is composed of discoveries from anatomically modern humans, archaic humans, early Homo, early hominins, and other hominids. The majority of the casts in this line have been recreated by our team of anatomical sculptors. Some are reconstructions made by anthropology professionals using fragmentary elements from original discoveries and extrapolating the missing parts from those (i.e. Neanderthal skeleton).