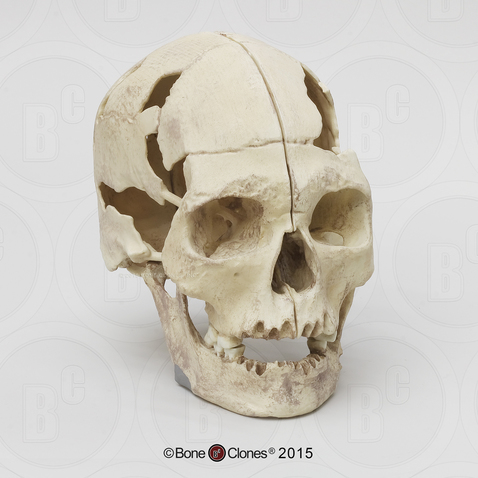 35,000 years BP: Oase 1 (mandible) and Oase 2 (cranium) were both discovered in the Peştera cu Oase, Romania. The mandible was found first, in 2002, by speleologists Milota, Bîlgăr and Sarcină. The cranium, which is from a different individual, was found by a team led by Trinkaus and Zilhão between 2003-2005. BH-048, which has a sagittal cut revealing details of the endocranium, is an exact cast of a 3D scan printed output provided to Bone Clones by Racoviță Institute of Speleology. From there Bone Clones cleaned up the scan lines and reconstructed the missing details and elements in consultation with Erik Trinkaus and Hélène Rougier and produced BH-049. These are the earliest and among the most complete anatomically modern human remains found to date from this period in Europe.