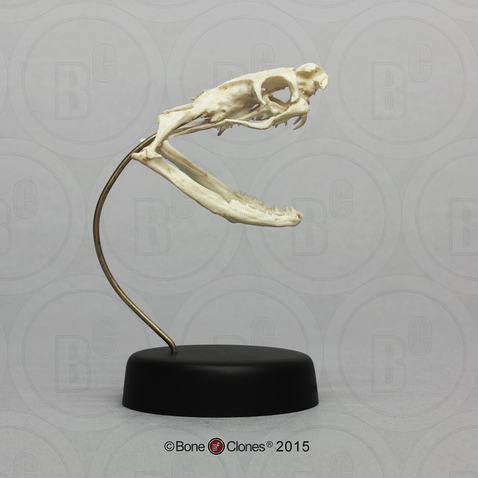 The king cobra is the largest of all the cobras, reaching a length of 18 feet. Their home range is India, Indonesia, Malaysia and the Philippines. They are very aggressive and guard their caves and home range. If confronted, they rear up to a height of nearly 5 feet and will chase a trespasser, including humans. Most other venomous snakes will try to escape and will only attack when annoyed at close range. The female will guard her eggs, which average around 30.

The king cobra differs from most snakes as it is mostly active during the day (other snakes at night) and prefers to eat other snakes, even pythons, if not too large. Their poison is neurotoxic. Fortunately for humans, there exists antivenin (antivenom). 1-part skull (jaw glued to cranium).

Stand and base included.