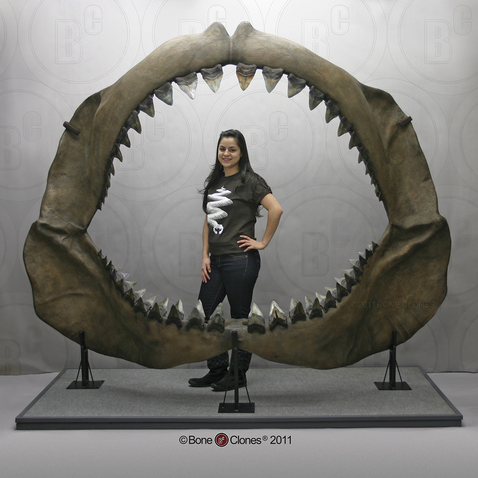 (Stands included, base not included)

Carcharocles megalodon, formerly known as Carcharodon megalodon, (Agassiz, 1835), or the Megalodon shark, inhabited the warm coastal waters of the world approximately 17 million years ago to about 2 million years ago. Their somewhat smaller predecessors roamed the seas as early as the late Eocene, about 35 mya. The specimens from which these teeth came are estimated to have lived about 10 mya. Fossilized shark jaw remains, apart from teeth and vertebrae, are rare, as the shark's jaw consists of mostly cartilage rather than bone. The teeth of Megalodon are similar in shape to those of the modern great white shark, Carcharodon circharias, but are much larger and thicker and have finer serrations. Both C. megalodon and C. circharias were conterminous, although research suggests the great white frequented the cooler waters while Megalodon was found in warmer waters. Sometime following the Pliocene, as the ocean currents changed and the waters cooled, the now infamous C. megalodon shark became extinct. The enormous size of the fossil teeth is reflected in the body size, with that of Megalodon approaching 60 feet in length, while the largest recorded modern great white measured 19'6." Although Megalodon jaws are unknown in the fossil record, we have reconstructed this Megalodon shark jaw frame based on the extant great white shark. The metal stands, as shown, are included along with a schematic of the layout. The wooden carpeted base is not included.

We are grateful to the Babiarz Institute of Paleontological Studies for the opportunity to cast this individual. The cast of the jaw is based on a recreation created by a team of researchers at BIOPSI. The jaw may be purchased with 3, 4 or 5 rows of teeth (BC-295-A3, BC-295-A4, BC-295-A5 respectively). Call us or order below.