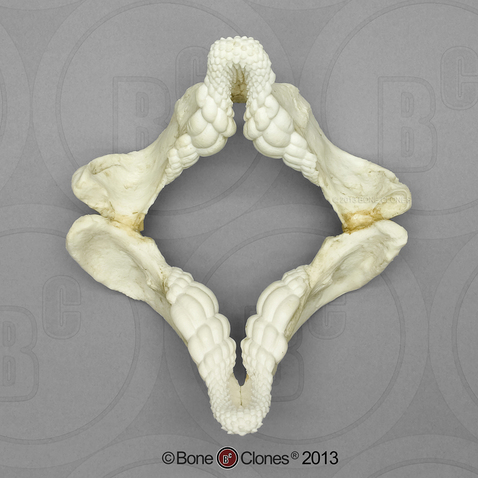 The Port Jackson shark, found in southern Australian waters, is a member of the group of heterodontid sharks, the family name referring to the variety of its teeth. These teeth are described as 'hetero' as the front teeth differ drastically from the back teeth. The front teeth are small and pointed while the rear teeth are wide and flat, an adaptation that aids their consumption of hard mollusks and crustaceans. The approximately five-foot long shark has a blunt head, distinctive harness-shaped markings on its head and back, and a poisonous spine just ahead of each of its dorsal fins. Rather than taking in water through its mouth as do most sharks, this specimen takes it in through its extra-large first gill and sends it out through the remaining four gills. This ability allows the shark to eat and breathe simultaneously.