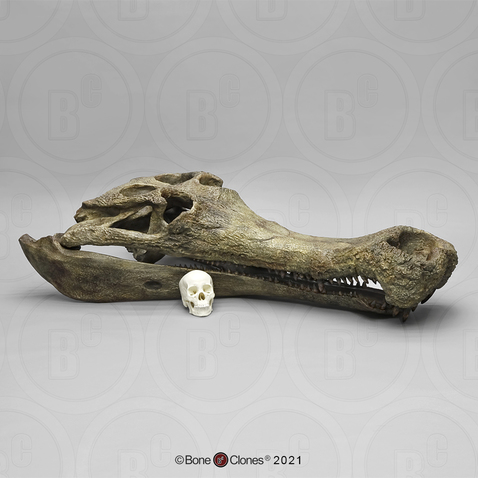 Sarcosuchus imperator (flesh eating crocodile), nicknamed supercroc, lived during the Cretaceous period (65 - 144 MYA). With an estimated body length of 40 feet, and a skull over 5 1/2 feet long, supercroc is one of the largest crocodiles that ever walked the Earth. The Sarcosuchus's jaws are lined with over 100 teeth. Unlike modern crocodilians whose teeth interlock, supercroc's lower teeth fit inside its uppers, leading scientists to the conclusion that Sarcosuchus imperator did not limit its diet to fish. It is believed that Sarcosuchus was an ambush predator capable of killing large dinosaurs that wandered too close to the water's edge. The Sarcosuchus's unusual bulbous snout is thought to have given it a greater ability to smell prey and make louder sounds. This gigantic crocodilian was first discovered in the Sahara Desert by Albert-Felix de Lapparent (1964) and named by France de Broin / Phillipe Taquet (1966).

The particular specimen that we cast from was discovered by Giancarlo Ligabue in the 1970s in the Tenere Desert region of the Sahara Desert in Niger. That original is on display at the Venice Museum of Natural History. The skull is courtesy of Centro Studie Ricerche Ligabue (Venice) in conjunction with the Natural History Museum of Paris. The jaw was sculpted using all available information and published photos. BC-156 is shown here with a human skull for size comparison. An individual tooth is also available, KO-156. Please see our Paleontology category and Zoology categories. Related products are listed below. 2-part skull (separate cranium & jaw).