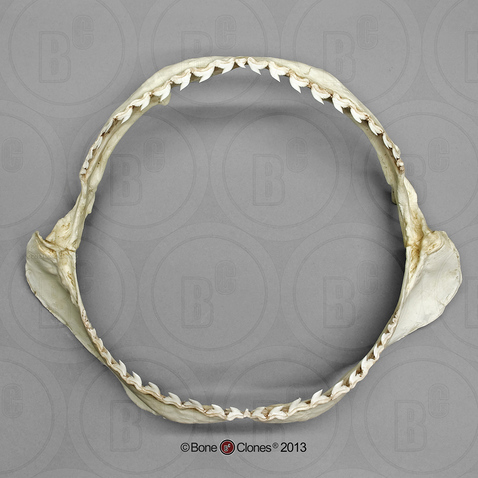 Tiger sharks (Galeocerdo cuvier) can be recognized by the dark stripes that run vertically down the length their body, though these stripes tend to fade as the shark matures. On average, tiger sharks remain at about ten to fourteen feet long; however, the largest tiger sharks can grow to be twenty to twenty-five feet in length. Tiger sharks have teeth unique among sharks, with curved cusps and serrated edges, which they use to tear off pieces of their larger prey. The only shark with more attacks on humans is the great white; however, the great white will normally swim away after biting a human once, while tiger sharks will continue to attack. Found throughout tropical and sub-tropical waters, tiger sharks often frequent coastal areas. Tiger sharks have been found as far north as Canada, Iceland and the United Kingdom. We are grateful to Dr. Gordon Hubbell, who generously loaned us the original from which this product is cast.