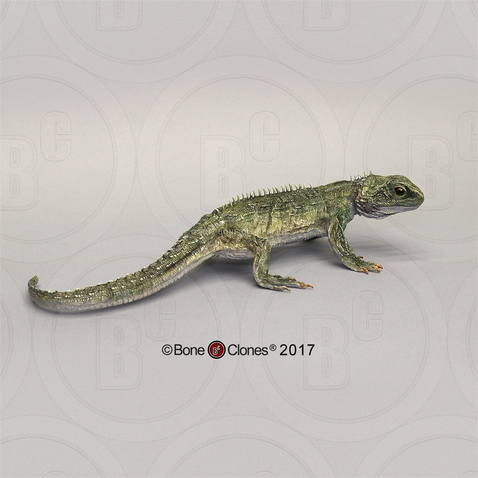 At first glance this unique animal looks like a large to medium sized spiny-backed lizard or iguana; however the resemblance is only superficial. In fact, they are the only surviving species of a family of reptiles called Sphenodontia, with a lineage that stretches back 200-million years, and are as closely related to birds as they are to lizards (and snakes). 60 million years ago a cataclysm wiped out ¾ of all life on Earth including dinosaurs and all then-living sphenodonts ... except for this single species. Tuataras have changed relatively little since that time. These "living-fossils" possess an odd mixture of characteristics: a primitive skull structure with unique dentition and "fenestration" (openings), hourglass vertebrae (common in fish but not in reptiles), an amphibian-like brain, crocodilian-like plates on their back and tail, a turtle-like hearing structure, and, unique among species, a third eye which is light sensitive, although not capable of forming images. The species name is borrowed from a native Maori word which means "Spiny back."