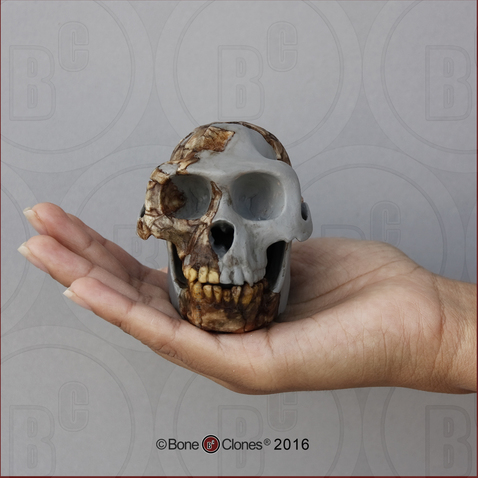 4.4 MYA. Discovered by Tim White in 1994 in the Afar region of Ethiopia, A. ramidus is considered by many to be the oldest supposed human ancestor. There are skeletal indications that suggest A. ramidus was capable of upright walking, quadrupedality, and tree climbing. Some argue that Australopithecus is a descendant of Ardipithecus, while others hypothesize that Ardipithecus might be an extinct sister species to Lucy's genus.

Reduced scale models decrease the overall height, width and depth of the model in the same proportion compared to the original. Smaller scale models may appear smaller than one might expect because the volume they occupy, or amount of space they take up, is so far less.

Compact and affordable, these beautifully proportioned and finished scaled down fossil hominid skulls are perfect for the space and budget-minded, the amateur anthropologist, or simply for the enthusiastic collector. A great gift for your favorite educator or for yourself!