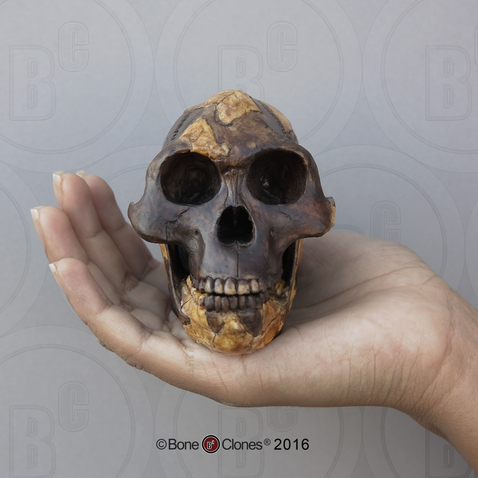 3.2 MYA. The first discovery of an Australopithecine was made by Donald Johanson in 1974 in Hadar, Ethiopia. "Lucy" was a young female about 3 ½ ft tall. She had an ape-sized brain, while the postcranial skeleton suggested she walked upright. This combination of an ape-sized brain in a hominid adapted to upright walking adds to the evidence that bipedalism occurred before the development of a relatively large brain.

Reduced scale models decrease the overall height, width and depth of the model in the same proportion compared to the original. Smaller scale models may appear smaller than one might expect because the volume they occupy, or amount of space they take up, is so far less.

Compact and affordable, these beautifully proportioned and finished scaled down fossil hominid skulls are perfect for the space and budget-minded, the amateur anthropologist, or simply for the enthusiastic collector. A great gift for your favorite educator or for yourself!