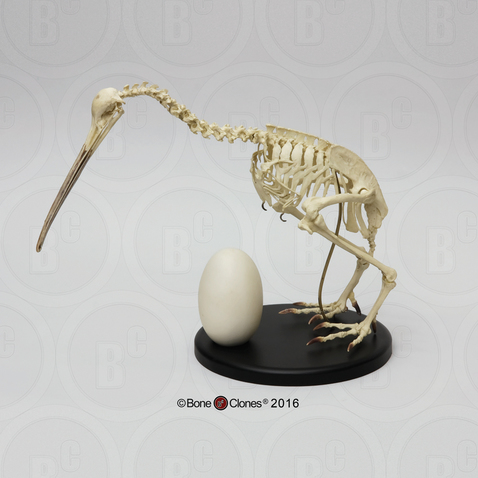 Living in the New Zealand forests, the brown kiwi (as well as all kiwis) produces the largest egg, proportional to its size, of any bird. The egg weighs around one pound and practically fills the entire body cavity. The small kiwi is closely related to the ostrich, from Africa, the emu from Australia, the cassowary from New Guinea, and the rheas from South America. All are in the same order, Struthioniformes. Unusual for most birds, the kiwis have an especially good sense of smell, with the nostrils located at the end of its long beak.

The Bone Clones® replica of the kiwi skeleton is provided with a kiwi egg and solid resin base, as shown.

Xrays of a living female kiwi showing an egg in the body are available for downloading.