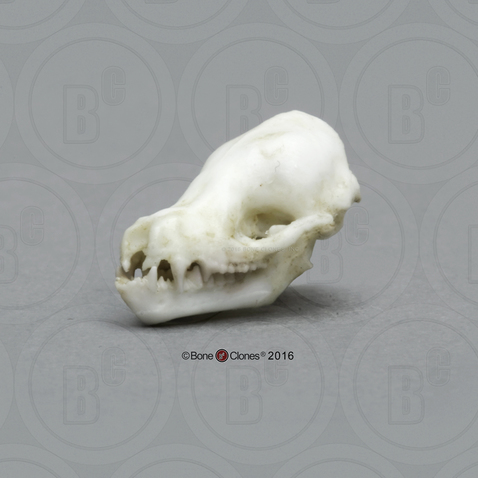 The Cave myotis (Myotis velifer) is a medium sized, cave dwelling bat found in the southwestern United States and in Central America. North American bat families can be split into two large groups to aid in the identification of a specimen; those with a complete palate and those without a complete palate. The cave myotis has an incomplete palate—a notch in the front of the skull between the upper canines—which is characteristic of the Vespertilionidae family to which it belongs. In addition to forming large colonies in caves and rock crevices, they may also roost in abandoned built structures and under bridges. This species weighs about 0.5 ounces (15 grams) and has a wingspan of about 13 inches (32 cm). Males are smaller than females. These nocturnal insectivores feed primarily in the hours after dusk or before dawn on moths and beetles using echolocation (sonar) to hunt and avoid obstacles. Bats are the only mammals capable of true flight. This cast would be an excellent addition to any nature center, zoology or small mammal or chiropterology program. 2-part skull (separate cranium & jaw) in a plastic case.

Also available in large scale (8 to 1) to better study the skull, teeth and unique ear morphology. Click Here for details.