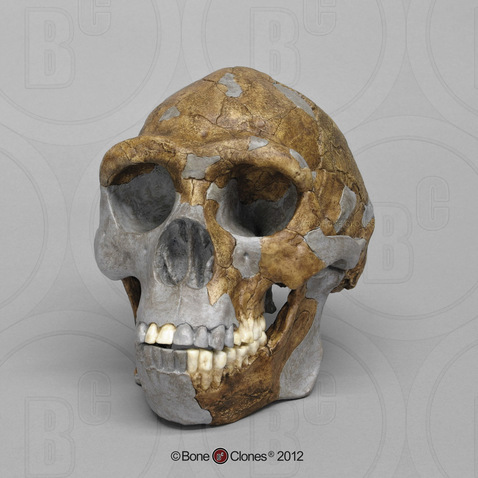 300,000 to 600,000 YA. The Homo erectus skull Peking Man is also known as Pithecanthropus pekinensis (Sinanthropus). The reproduction offered here was recreated by Ian Tattersall and Gary J. Sawyer using original casts. In their reproduction, the gray areas clearly indicate the portions that were sculpted and which were based on original fragments. The dark colors represent the areas that were created using casts from original material. The reconstruction is a composite of several individuals, skull and mandible fragments and isolated teeth. Licensed exclusively to Bone Clones, we are grateful to Tattersall and Sawyer for permitting us to cast this remarkable piece.

The Bone Clones® Hominid line is composed of discoveries from anatomically modern humans, archaic humans, early Homo, early hominins, and other hominids. The majority of the casts in this line have been recreated by our team of anatomical sculptors. Some are reconstructions made by anthropology professionals using fragmentary elements from original discoveries and extrapolating the missing parts from those (i.e. Neanderthal skeleton). A small portion of the hominin line has been cast from original material. 2-part skull (separate cranium & jaw).

The following text was provided by Sawyer:

This 1995 reconstruction of Zhoukoudian (Choukoutien) Homo erectus was selected from the comprehensive first generation casts housed at the American Museum of Natural History (AMNH). These excellent, highly detailed casts were prepared by Dr. Franz Weidenreich and his colleagues just prior to the tragic loss of the original fossils during WWII. These casts, the reference set of which were officially presented to the AMNH in 1941, are all that remains of the original Zhoukoudian fossil humans.

Since Weidenreich had previously constructed a female skull from fragmented parts, the interest of Tattersall and Sawyer was to create a male skull, for which more elements were actually available. To do so, all skull elements were based on presumed male specimens as previously determined by Dr. Weidenreich.

The basic reconstruction began with the cranial vault from male skull XII because it preserves the proximal halves of both nasal bones and most of the lateral margin of the left orbit, including the superior part of the malar (zygomatic) bone. To these key structures were added the inferior portion of a left malar, the frontal process of a left maxilla, another portion of a left maxilla and two substantial portions of the right and left sides of the mandible. The mandible halves are from the same individual, while the cranial elements are from an assortment of different individuals.

This assemblage of facial and cranial parts-the former mostly from the left side-produced a near complete continuity of facial elements from top to bottom and side to side of the skull. The rebuilt left side of the face was then mirror-imaged to create the missing right side. Casts of isolated teeth from Zhoukoudian served as models for sculpting missing teeth.

A display stand is available below.