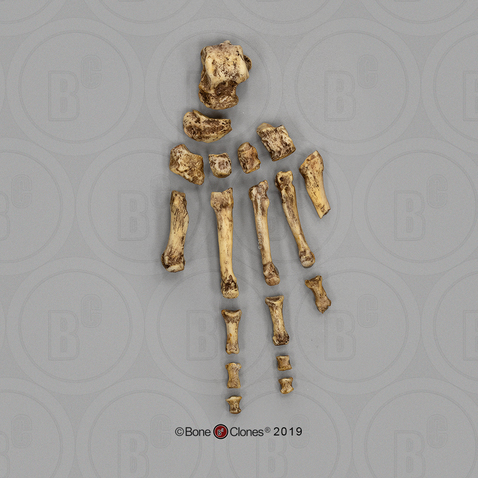 Disarticulated left foot of Homo floresiensis. An Articulated version of the foot, as well as other H. floresiensis products can be found here.

The entire lower limb skeleton of Homo floresiensis exhibits a mosaic of primitive and derived (more human-like) features, providing a glimpse of a bipedal hominin that existed on the Indonesian island of Flores some 100,000 to 18,000 years ago. Studying the morphology of the feet can provide significant insight into the evolution of bipedalism. In the case of LB1, the foot is relatively long compared to the femur and tibia, proportions not seen in hominins, but in some African apes. The foot exhibits some human-like qualities such as a non-grasping big toe, while retaining some primitive features such as long curved toes and lack of a foot arch. This would result in a walking gait not seen in modern humans. Since the foot lacks an arch, there would have been limitations in efficient running and walking. This mosaic of features has led some to theorize that the ancestry of Homo floresiensis is earlier than that of Homo erectus.