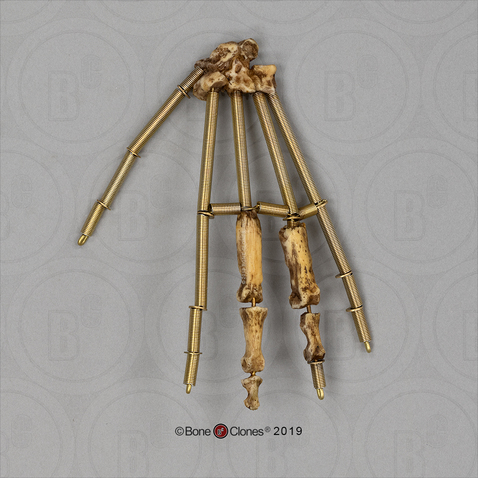 Articulated left hand of Homo floresiensis. A disarticulated version of the hand, as well as other H. floresiensis products can be found here. Due to the fragmentary nature of the find, missing elements are indicated with brass parts.

The entire upper limb skeleton of Homo floresiensis exhibits a mosaic of primitive and derived (more human-like) features, providing a glimpse of a hominin that existed on the Indonesian island of Flores some 100,000 to 18,000 years ago. The hand and wrist of H. floresiensis resemble a more primitive morphology than that of modern humans. Specifically, some of the bones of the wrist (the trapezoid, scaphoid and capitate) resemble those found in African apes and australopithecines. Additionally, H. floresiensis was found alongside evidence of stone flaking technology, supporting the hypothesis that hominins with primitive wrist morphology were able to make and use stone tools.