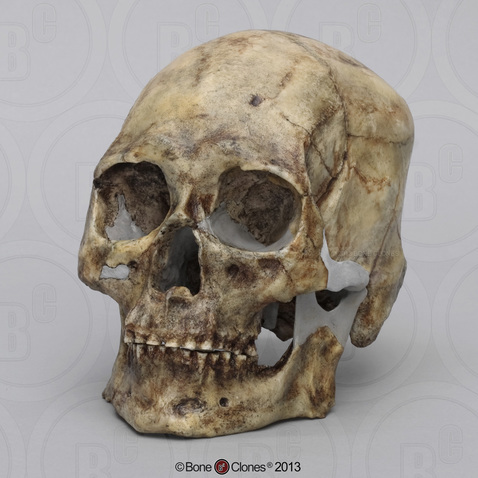 The Bone Clones® cast of Kennewick Man is an artistic reconstruction created by Dr. James Chatters and Bone Clones, Inc. in 2013. See the references below for much more extensive information.

9,000-9,500 years old. The skull of Kennewick Man was discovered in the Columbia River in Kennewick, Washington, in late July of 1996 by Thomas and Deacy, two men who had gone to the river to watch a boat race. With the assistance of Dr. James Chatters, a local paleontologist and archaeologist who was serving as forensic anthropologist at the time, much of the skeleton was found. A stone spearpoint embedded in the right ilium of the associated skeleton is a Cascade Point, a representative of the Old Cordilleran Culture, which spread from the Washington coast to the interior Columbia Plateau shortly after 9000 years ago. Researchers estimate the individual to have been between 5' 7" and 5' 9", 160 pounds and approximately 40 years old at the time of his death. Morphological analysis at the time suggested the skull exhibited features similar to Polynesian or Ainu peoples. However in 2015, DNA analysis suggests close affiliation with Northern Native American groups, particularly the Colville, Ojibwa, and Algonquin. As a result of this analysis, the remains of Kennewick Man were repatriated to these groups in compliance with NAGPRA (Native American Graves Protection and Repatriation Act) in February 2017.

The Bone Clones® Hominid line is composed of discoveries from anatomically modern humans, archaic humans, early Homo, early hominins, and other hominids. The majority of the casts in this line have been recreated by our team of anatomical sculptors and anthropology professionals.