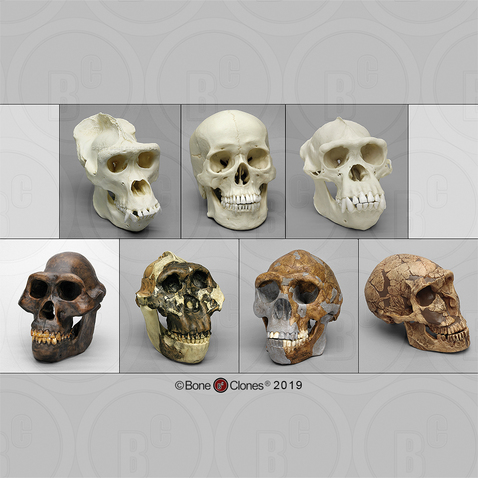 Representing extant primates: the largest of the primates (Gorilla), a modern human of Asian ancestry, and the genetically closest relative (Chimpanzee) to modern humans.

Representing Fossil Hominids: A. afarensis ( 2.9 to 3.6 MYA): An early hominid found only in Africa; A. boisei (1.8 MYA): A unique species in hominid evolution with a massive skull, enormous molars and cranial adaptations for powerful chewing, hence its nickname Nutcracker Man; Homo erectus (300,000 to 600,000 YA): A remarkable recreation by Tattersall and Sawyer of Peking Man, found near Beijing, China, at the Zhoukoudian Cave in the late 1920s; H. neanderthalensis (50,000 YA): A "classic" Neanderthal, found in France, with features best representing the species.

All items are available individually but have been discounted for a significant savings when purchased as a set. The Bone Clones® Fossil Hominid line is composed of discoveries from anatomically modern humans, archaic humans, early Homo, early hominins, and other hominids. The majority of the casts in this line have been recreated by our team of anatomical sculptors. Some are reconstructions made by anthropology professionals using fragmentary elements from original discoveries and extrapolating the missing parts from those (i.e. Neanderthal skeleton).

Display stands are available below, and are listed on each individual skull's webpage.