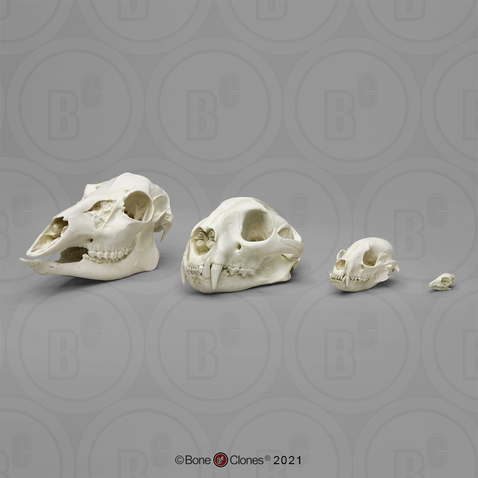 What's for dinner? Meat? Insects? Plants? All of the above?

An animal skull's form (morphology) and dentition (form and number of teeth) gives clues as to how and what it eats. Dentition and eye placement are tools that have evolved for specific functions. Some teeth are shaped perfectly for stabbing, cutting or slicing, while others work well to grind. Eye socket placement and orientation gives further clues. Eyes positioned and oriented forward, for binocular vision, are helpful for targeting prey and calculating distance; eyes positioned and oriented laterally (to the sides) allow for greater peripheral vision and the ability to see threats from wide angles. Each of these adaptations helps its owner acquire nutrition, avoid threats and survive to reproduce.

Bone Clones, Inc. has created a set of four mammal skulls that can be used to identify, compare, and contrast the characteristics and features that help to place an animal skull into a dietary group. Featuring four types of dietary classifications, the set can be used to explore a range of concepts, from linguistic, morphological, and scientific to artistic.

The name of each group ends in the suffix 'vore' – from the Latin word meaning 'to eat', or 'to devour'. The prefixes identify what the animal specializes in eating.

Instructors will be able to discuss the skull and teeth features of each animal and how they serve their dietary needs. Topics examining the niches of a balanced ecosystem can also be explored. Additionally, each animal can be compared to their prospective habitats, bringing into focus discussions of animal adaptation, animal behavior and environmental concepts.

In visual arts curriculum, this set can be used for students to analyze form and its depiction in drawing and sculpting, as material for still life compositions, and as comparative anatomical reference for student's own depictions of animals. These skulls can be used enrich student's knowledge as to how underlying form pertains to living animals, to compare historic and cultural uses of bone material for artistic purposes, and to teach about careers as scientific illustrators, film or fine artists.

This set can be useful in satisfying some of the national and state requirements of the Next Generation Science Standards (NGSS), The National Visual Arts Standards, and State Standards for Arts Education.