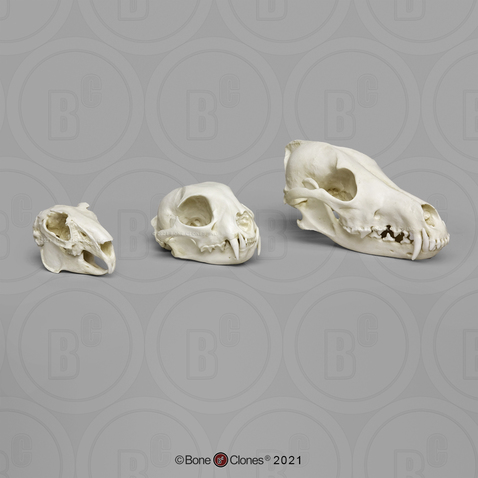 Predator or prey? Can you tell by looking at an animal which it is?

A skull's features can provide clues as to whether its owner was a predatory or preyed upon animal. Its size, dentition (form and number of teeth) and eye socket position contribute pieces of information that help with classification. Dentition contributes information about how and what an animal eats. Eye orientation and position vary according to what role eyesight plays in an animal's life.

This comparative set of three mammal skulls was created to demonstrate the key features that help to determine if an animal is a predatory animal or a preyed animal. This skull set contains a coyote, a bobcat and a jackrabbit, all with different skeletal features that highlight their dietary adaptations. Additionally, each animal can be compared to their prospective habitats, bringing into focus discussions of animal adaptation, animal behavior and environmental concepts.

In visual arts curriculum, this set can be used for students to analyze form and its depiction in drawing and sculpting, as material for still life compositions, and as comparative anatomical reference for student's own depictions of animals. These skulls can be used enrich student's knowledge as to how underlying form pertains to living animals, to compare historic and cultural uses of bone material for artistic purposes, and to teach about careers as scientific illustrators, film or fine artists.

This set can be useful in satisfying some of the national and state requirements of the Next Generation Science Standards (NGSS), The National Visual Arts Standards, and State Standards for Arts Education.